Omniscient Google defines it as:

Google is completely right. This is exactly what it is

But culture goes a lot deeper and plays a subjective role in all of us and inextricably forms a part of our identity.

That being said, culture has become a lot more complex and diverse.

Let’s take myself for example:

A 2nd generation Australian with a Sri Lankan Tamil background.

Growing up, there was a constant battle between assimilating into mainstream society and my unchartered Sri Lankan Tamil heritage. A common conversation bordering occasionally on irritation would happen more often than not:

Stranger: So where are you from?

Me: Well, I am Australian

Stranger: No… I mean where are you really from? Whats your background?

Only after living in the motherland for an extended period of time did I realise how little I knew about my roots.

I realised whilst growing up, my parents focussed very little on being Tamil and even more so on being Sri Lankan. My grasp of the language that my ancestors had spoken for time immemorial was next to woeful. I could only understand very basic phrases at best. Sure as hell could not speak to save my life and even if I tried was often met with raucous laughter. If that wasn’t all, I certainly could not read and write the elaborate ancient script.

Funnily enough, this is a narrative not uncommon amongst us 2nd generation Sri Lankans in Australia for whatever reason that may be.

My cultural awakening transpired amongst witnessing and very quickly becoming part of the proceedings of Hindu Tamil festivals also known as Thiruvazha (/Thi-ru-va-lah/). First at my mothers village temple festival at Manipay Marathady Pillaiyar Kovil and then later at my fathers, Nallur Kandasamy Kovil; both in Jaffna in the North.

The hot dry Jaffna sun was starting to reach its zenith.

I had a brand new crisp pearlescent veshti (the tuxedo of sarongs) laid out in front of me.

I had never tied one of these before.

Putting on a sarong is child’s play

But putting on a veshti required a technique that as of yet, I wasn’t privy to.

I flipped onto Youtube and watched the instructions as to how to put one on.

After a few frustrating minutes, I looked at the mirror from the front,

And am greeted with roaring laughter

My Periamma (mums older sister) shouts out in amusement “I can see your underpants!”

I go back into the room begrudgingly.

I look at the mirror from behind

After a few minor adjustments I was good to go.

Every single Tamil Hindu temple has a festival and usually it runs for 2-3 weeks. Despite the festivals being intertwined with religion with its millennia old rituals, rites, chanting and music.

It’s a celebration of the society, its values, its music, its arts, its foods, its customs, its identity and culture.

Centuries old poetry is recited by children. Caranatic music which is as old as the Hindu vedas (meaning no one knows how old) with its complexities and strict learned composition is played in the temple halls. Bharathanatyam, an ancient dance art-form dated from 200BC is performed at night for all revellers to behold.

The dry heat had taken its toll

My bare chest was covered in a film of thick sweat

Amongst the crowd of thousands I had lost my family

I found a vacant space against the temple wall

Closed my eyes and focussed on my breath

Gradually getting lost in the sounds of Sanskrit chanting, bells and smell of camphor

Sparks of endorphins jolted me from multitudinal directions

I slowly begin to lose myself in an imagined past

I get tapped on the shoulder

‘Lift?’ a man motions pointing to the encroaching pandemonium.

But deep down I knew all the squats I had done in the past had culminated to this point in my life.

The premise behind the temple festival is the idol of the temple comes out of their shrine and is paraded first around the inside of the temple and then outside the temple for all to see. The whole proceeding allows the gatherers to get closer to the stone idol and with it their hopes and aspirations.

Yet, beyond the religious context, the primary purpose of the temple festival is a social gathering where children run freely, housewives gossip, unmarried girls look for suitors and men continue their fascination with lifting heavy things and playing with fire. 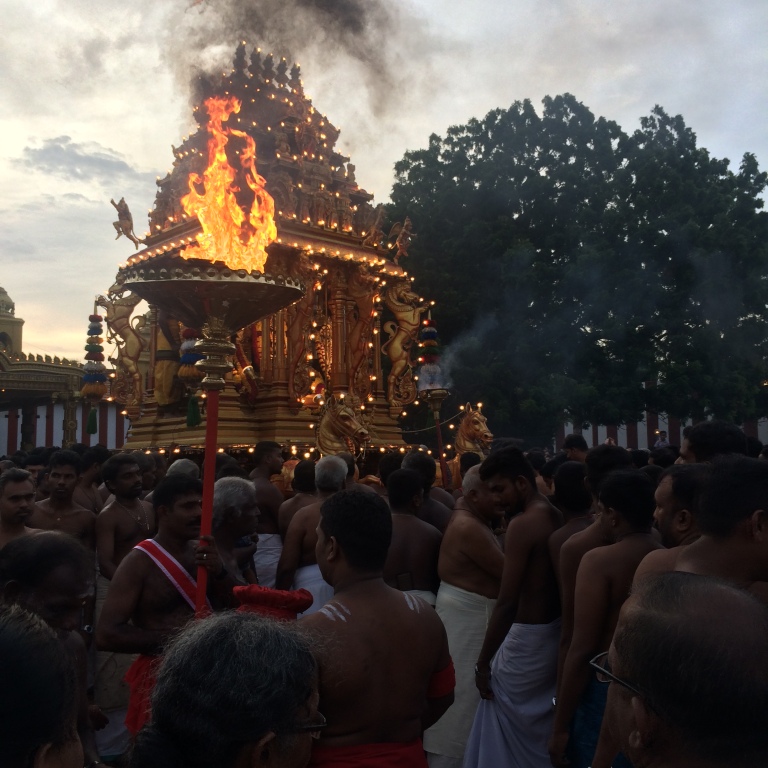 Kogulan looks over at me

We later went to high school together

Caught the same morning and afternoon train together

Also drank my first cruiser in his backyard

Fittingly we were now smashing down a Falooda (half rose syrup milkshake and a half pure sugar concoction) in the village both our mothers had grown up in.

The last day called Ther is the Big Bang

This is the real spectacle.

Certain strong believers will pierce themselves through their skin, tongue, cheeks and backs as a penance.

Devotees will roll around the temple

Musicians will be playing the temple drums and wind instruments (nadaswaram) with fervour.

Children will be singing ancient songs of poetic devotion.

All these acts having symbolism for a greater meaning

Their hopes and aspirations in the sacrifices they make.

All the small shops (kadais) along the way, blaring out music

A man on a loudspeaker is extolling praises for the temple

As I enter back into the atrium of the old house

The assault of the sights, sounds, smells and tastes is something I’m not quite sure I’ve completely recovered from.

The energy from witnessing this still surviving ancient cultural celebration has motivated me to get a better grasp of my heritage.

I will always be Australian first and foremost,

But the mysterious black hole that was intertwined into my identity doesn’t seem so unfamiliar anymore.

Having a better appreciation and understanding of being both Australian as well as Sri Lankan Tamil has grounded me in more ways than I thought was possible before I ventured on this journey.

Whilst writing this, a recurring memory takes me back to when a fisherman from Trincomalee that navigated our diving boat offhandedly in Tamil offered me some advice: